DV Computers Fremantle | Has your computer been compromised by a virus?

Happiness is a computer that is protected from viruses, Trojans, spyware, worms, and other malware, including Ransomware.

If you’ve suddenly found yourself with a virus of sorts, and don’t know where to turn, DV Computers has the solution. They are a local based Fremantle company, who specialise in virus removal and data recovery.

Computer viruses are created to disrupt the workings of a computer by copying themselves so they can be passed on to as many computers as possible. They can enter your computer via attachments to emails, visits to contaminated websites and in downloads.

A Trojan, on the other hand is a lot more complex. Each Trojan is designed to invade computers for specific sinister reasons. For instance, Ransom Trojan can block your computer and demand a fee to set it free to operate again. A Trojan is not a virus because it cannot replicate itself. However, a Trojan can be hidden within a computer virus.

According to the Oxford Dictionary in Lexico, “spyware is software that enables a user to obtain covert information about another’s computer activities by transmitting data covertly from their hard drive”. However, spyware has other uses, including damaging your computer or other devices, and stealing from your internet or other devices data allowance.

Spyware could be described as a type of malware and is useful for those wishing to commit cybercrime.

Wait, there is more!

Did you know that a computer worm is a type of malware that copies and distributes itself from computer to computer? It can be transmitted in software, attachments in spam emails or even in instant messaging.

A worm can infect your computer with malicious software. It can delete and replace files, or simply reproduce itself to take up hard drive space, steal data, or enable a hacker to take control of your computer and its system settings.

You computer may have a worm if it messages you saying your disk is low on memory; or you’ve noticed the computer has slowed down, (a worm could be eating up your processing power); and perhaps you’ve noticed files are disappearing.

If you find yourself with one of the above, then consider giving DV Computers a call. They also offer a pickup and delivery option if you are unable to get out.

If you are faced with an infected computer, a virus scan is in your first port of call. However, the damage to the computer will need to inspected, and may involve data retrieval. As the owner, you will want to get the computer running at optimal level and set it up so that the security breaches won’t happen again.

DV Computers are a Western Australian owned IT company based at Myaree and run a mobile IT service from its store and workshop, providing an onsite computer rescue service.

DV handles Mac’s, PC’s and laptops. Its technicians remove viruses, Trojan; spyware; worms; and all malware. The technicians will advise on protection strategies. Security programs can be supplied and installed and advice provided on how to use them for maximum benefit.

The aim of DV Computers is to keep its customers’ computers secure.

DV has developed a reputation with its Perth and Fremantle clients for going out of its way to help when trouble strikes. Its store is packed with up to the minute IT gear. Students get a 10% discount.

Drop in and see for yourself what’s going on at DV Computers, of give them a call if you have any type of computer issue and can’t leave your home or office.

Get Your Apple Products Repaired Today!

Pick Up And Drop Off Computer Repairs 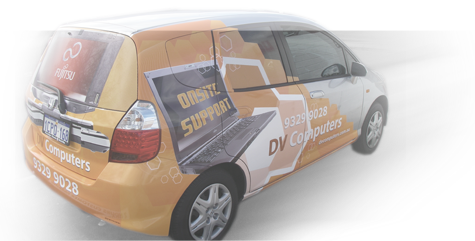 Too Busy to leave your office / home?
dv computers onsite support got it all under control!

And get the benefits from us, all products & services purchased are supported by warranty
from DV Computers! Yes, it`s true!